Deep fjords, majestic peaks, peaceful archipelagos, secluded fishing hamlets. One might think of Norway but this is the rugged coastline of British Columbia and the Great Bear Rainforest. Right in our back yard, this was our second trip to B.C. where where we made our basecamp on North Vancouver Island. The North Island is wild and less traveled with plenty of opportunities to spot Black Bear, wolves, elk, eagles and all kinds of shore birds. It is also a jumping off point to visit hidden inlets on the main land. Our main focus was on marine mammals and Grizzly Bears and we were not disappointed.

We started with a whale watching trip out of Port McNeil. The Humpbacks were every where, feeding on small fish that were swirling in large bait balls. It was chaos. Gulls and other sea birds were circling and diving, White Sided Dolphins were getting in on the action and the occasional harbor seal and sea lion would surface in amongst it all. We saw three whales breech, jumping out of the water, their tails at least a foot off the sea, then crashing down with such force you could feel the spray on your face. These creatures weigh in at up to 79,000 pounds so you gotta wonder what kind of energy it takes for lift off. 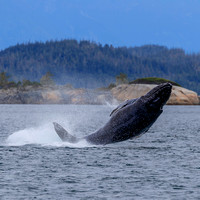 The next day was island day and it was a good thing because the winds were up and no boats were leaving port. We spent the morning photographing a flock of Black Turnstones who decided to rest on a rocky outcrop just below our little beachside cabin. These birds spend their summer in Alaska and winter on rocky shores as far south as Baja California and Mexico. After a couple hours, the flock continued on their way and we went off in search of other island wildlife. One can often find Black Bears and Wolves on the shoreline at low tide, feeding on crustaceans, not only on Vancouver Island but also larger islands all the way up the coast. No luck for us that day, they were all escaping the high winds, hiding deep in the forest.

The winds calmed and we spent the next two days jetting across the Queen Charlotte Straight and up inlets where the mountains towered above us. At the head of the inlet, we transferred onto a smaller boat in order to negotiate the estuary and get up close and personal with the Grizzly Bear. Wow, we were close. No worries, they were concentrating on foraging in the grasses and feeding on Pink Salmon running up the river. They certainly knew we were there. At one point, we were tied up to a log on the side of the river, patiently waiting for bears who might swim by. A big boar crashed through the bushes and came out right next to us. He stuck his nose in the air, turned, gave us a stern look and headed up river in search of tastier delicacies!

The north island is a great base for trips to the mainland. You never know what you will come across on the trip across the straights. We had a huge school of White Sided Dolphins swim with the boat. We did the “Titanic pose” off the bow and looked straight down to dolphins surfing the bow wave and looking up at us. Two or three would enjoy the ride, then peal away and more would take their place. I turned to see hundreds of dolphins behind us. One dolphin at the back of the group started jumping wildly into the air and suddenly they all turned and headed north. He must have been the rear sentry signally that play time was over. We finally spotted an Orca with two calfs. The orca are scarce now. The runs for Chinook and Coho salmon, the resident Orca’s primary diet, were small and came early this year forcing the Orca to go elsewhere in search of food. It is a reminder of how the natural world is changing as the climate shifts.

Our travels to B.C. coincided with a visit from the Duke and Duchess of Cambridge. The Queen has placed the central coast of Canada under the Queen’s Commonwealth Canopy. This initiative brings together all 53 countries of the Commonwealth to work together towards saving the worlds most important natural habitats. Prince William and Kate’s visit helped bring the spotlight onto the Great Bear Rainforest and the indigenous people who live there. This is the largest temperate rain forest on our planet. Not only do salmon, bears, marine mammals and other wildlife depend upon it but the health of our entire planet depends upon it. We hope our photographs will bring awareness to the region and that everyone will help protect this fragile ecosystem.